Postcards from a summer’s day 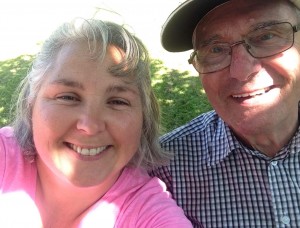 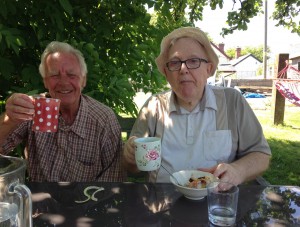 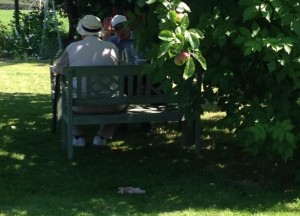 Putting a bench to rights

Alan, a carpenter, has been with our host Tam for over a year now. He likes to keep busy, pottering from time to time in her garden, sometimes helping her out with the odd bit of edge trimming.  A dilapidated bench in Tam’s garden, in need of some considerable TLC, caught his eye and each time he passed it by he would tap it with his walking stick and tut, in an apparently affectionate, yet mildly disapproving manner.  Eventually the disrepair of the bench became too much for Alan to bear and on one weekly visit to Tam he arrived with a wire brush (see photo below) and can of primer paint in order to rectify the situation. Tam and Alan set to work on the bench, but almost immediately their progress was stymied as the bench virtually dismantled itself.  What to do? Now the project had been started, failure was not an option. Happily, it seems that it was not only Alan for whom this deficient piece of garden furniture was an irritant. A neighbour of Tam’s, who has recently started joining her group for lunch, and was there during the whole bench-gate debacle, decided that he would take the slats for the bench seat back to his house to sand down.  In the meantime Alan got on with the job of wire-brushing the frame. A decision has been reached that once the slats are sanded down and re-joined with the frame the group will complete the job and paint the bench. The consensus is that once restored to its former glory the bench will be called The Filo Bench. 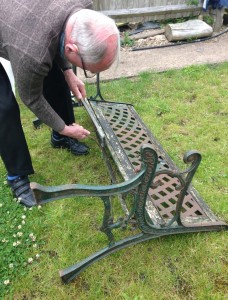 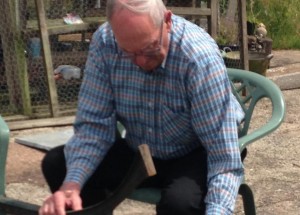